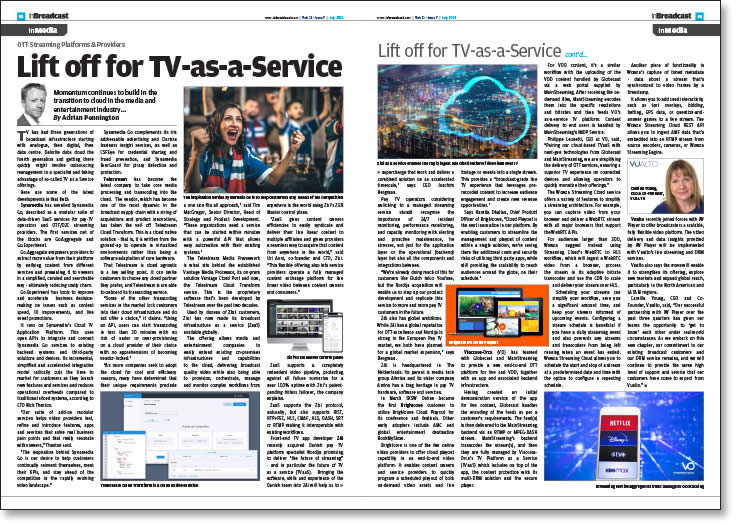 TV has had three generations of broadcast infrastructure starting with analogue, then digital, then data centre. Deloitte dubs cloud the fourth generation and getting there quickly might involve outsourcing management to a specialist and taking advantage of so-called TV as a Service offerings.

Here are some of the latest developments in that field:
Synamedia has unveiled Synamedia Go, described as a modular suite of data-driven SaaS services for pay-TV operators and OTT/D2C streaming providers. The first services out of the blocks are Go.Aggregate and Go.Experiment.   Go.Aggregate empowers providers to extract more value from their platform by unifying content from different services and presenting it to viewers in a simplified, curated and searchable way - ultimately reducing costly churn. Go.Experiment has tools to improve and accelerate  business decision-making on issues such as content spend, UI improvements, and live event promotions.

It runs on Synamedia’s Cloud TV Application Platform. This uses open APIs to integrate and connect Synamedia Go services to existing backend systems and third-party solutions and devices. Its incremental, simplified and accelerated integration model radically cuts the time to market for customers as they launch new features and services and reduces operational overheads compared to traditional siloed systems, according to CTO Nick Thexton.

“The inspiration behind Synamedia Go is our desire to help customers continually reinvent themselves, meet their KPIs, and stay ahead of the competition in the rapidly evolving video landscape.”

Synamedia Go complements its Iris addressable advertising and Clarissa business insight services, as well as CSFEye for credential sharing and fraud prevention, and Synamedia EverGuard for piracy detection and protection.

Telestream has become the latest company to take core media processing and transcoding into the cloud.  The vendor, which has become one of the most dynamic in the broadcast supply chain with a string of acquisitions and product innovations, has taken the veil off Telestream Cloud Transform. This is a cloud native solution - that is, it is written from the ground-up to operate in virtualized environments rather than being a software adaptation of core hardware.   That Telestream is cloud agnostic is a key selling point. It can invite customers to choose any cloud partner they prefer, and Telestream is are able to onboard its transcoding service.

“Some of the other transcoding services in the market lock customers into their cloud infrastructure and do not offer a choice,” it claims. “Using an API, users can start transcoding in less than 30 minutes with no risk of under or over-provisioning on a cloud provider of their choice with no apprehensions of becoming vendor-locked.”

“As more companies seek to adopt the cloud for cost and efficiency reasons, many have determined that their unique requirements preclude a one size fits all approach,” said Tim MacGregor, Senior Director, Head of Strategy and Product Development. “These organizations need a service that can be started within minutes with a powerful API that allows easy automation with their existing systems.”

The Telestream Media Framework is what sits behind the established Vantage Media Processor, its on-prem solution Vantage Cloud Port and now, the Telestream Cloud Transform service. This is the proprietary software that’s been developed by Telestream over the past two decades.

Used by dozens of Zixi customers, Zixi has now made its broadcast infrastructure as a service (ZaaS) available globally.

ZaaS supports a completely redundant video pipeline, protecting against all failure scenarios for a near 100% uptime with Zixi’s patent-pending hitless failover, the company explains.

Front-end TV app developer 24i recently acquired Danish pay TV platform specialist Nordija promising to deliver “the future of streaming” - and in particular the future of TV as a service (TVaaS).  Bringing the software, skills and experience of the Danish team into 24i will help us to  supercharge that work and deliver a combined solution on an accelerated timescale,” says CEO Joachim Bergman.

Pay TV operators considering switching to a managed streaming service should recognise the importance of 24/7 incident monitoring, performance monitoring, and capacity monitoring with alerting and proactive maintenance, he stresses, not just for the application layer or the operational (backend) layer but also all the components and integrations between.

“We’re already doing much of this for customers like Dutch telco Youfone, but the Nordija acquisition will enable us to step up our product development and replicate this service to more and more pay TV customers in the future. 24i also has global ambitions. While 24i has a global reputation for OTT excellence and Nordija is strong in the European Pay TV market, we both have planned for a global market expansion,” says Bergman.

24i is headquartered in The Netherlands. Its parent is media tech group Aferian and its sister company Amino has a long heritage in pay TV hardware, software and services.

In March SXSW Online became the first Brightcove customer to utilize Brightcove Cloud Playout for its conference and festivals. Other early adopters include AMC and global entertainment destination BookMyShow. Brightcove is one of the few online video providers to offer cloud playout capability in an end-to-end video platform. It enables content owners and service providers to quickly program a scheduled playout of both on-demand video assets and live footage or events into a single stream. This provides a “broadcast-grade live TV experience that leverages pre-recorded content to increase audience engagement and create new revenue opportunities.” Says Namita Dhallan, Chief Product Officer of Brightcove, “Cloud Playout is the next innovation in our platform. By enabling customers to streamline the management and playout of content within a single solution, we’re saving them the additional costs and security risks of utilizing third party apps, while still providing the scalability to reach audiences around the globe, on their schedule.”

Viaccess-Orca (VO) has teamed with Globecast and MainStreaming to provide a new end-to-end OTT platform for live and VOD, together with an app and associated backend infrastructure.

Having created an initial demonstration version of the app for live content, Globecast handles the encoding of the feeds as per a customer’s requirements. The feed(s) is then delivered to the MainStreaming backend via an RTMP or MPEG-DASH stream. MainStreaming’s backend transcodes the stream(s), and then they are fully managed by Viaccess-Orca’s TV Platform as a Service (TVaaS) which includes on top of the app, the content protection with its multi-DRM solution and the secure player.

Philippe Leonetti, CEO at VO, said, “Pairing our cloud-based TVaaS with next-gen technologies from Globecast and MainStreaming, we are simplifying the delivery of OTT services, ensuring a superior TV experience on connected devices and allowing operators to quickly monetize their offerings.”

The Wowza Streaming Cloud service offers a variety of features to simplify a streaming architecture. For example, you can capture video from your browser and deliver a WebRTC stream with all major browsers that support the WebRTC APIs.   For audiences larger than 300, Wowza suggest instead using Streaming Cloud’s WebRTC to HLS workflow, which will ingest a WebRTC video from a browser, process the stream in its adaptive bitrate transcoder and use the CDN to scale and deliver your stream over HLS.

Scheduling your streams can simplify your workflow, save you a significant amount time, and keep your viewers informed of upcoming events. Configuring a stream schedule is beneficial if you have a daily streaming event and also prevents any streams and transcoders from being left running when an event has ended. Wowza Streaming Cloud allows you to schedule the start and stop of a stream at a predetermined date and time with the option to configure a repeating schedule.

Another piece of functionality is Wowza’s capture of timed metadata - data about a stream that’s synchronized to video frames by a timestamp.

It allows you to add cued interactivity such as text overlays, bidding, betting, GPS data, or question-and-answer games to a live stream. The Wowza Streaming Cloud REST API allows you to ingest AMF data that’s embedded into an RTMP stream from source encoders, cameras, or Wowza Streaming Engine.

Vualto recently joined forces with JW Player to offer broadcasters a scalable, fully flexible video platform. The video delivery and data insights provided by JW Player will be implemented with Vualto’s live streaming and DRM services.   Vualto also says the move will enable it to strengthen its offering, explore new markets and expand global reach, particularly in the North American and LATAM regions.

Camilla Young, CEO and Co-Founder, Vualto, said, “Our successful partnership with JW Player over the past three quarters has given our teams the opportunity to ‘get to know’ each other under real-world circumstances. As we embark on this new chapter, our commitment to our existing broadcast customers and our DRM service remains, and we will continue to provide the same high level of support and service that our customers have come to expect from Vualto.”