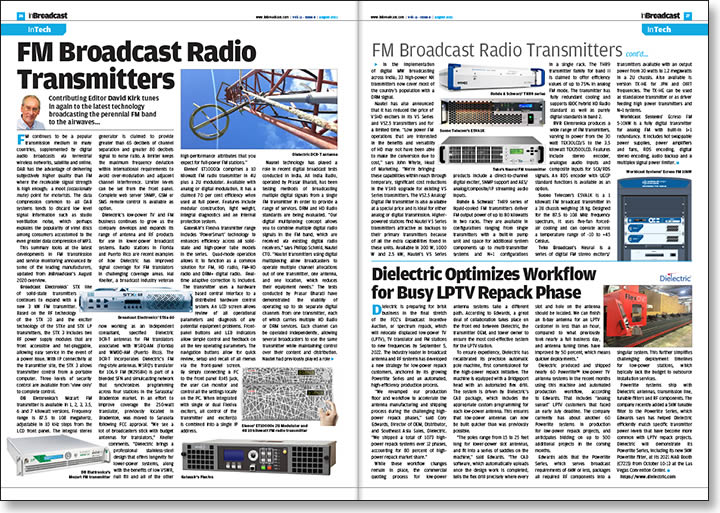 FM continues to be a popular transmission medium in many countries, supplemented by digital audio broadcasts via terrestrial wireless networks, satellite and online. DAB has the advantage of delivering subjectively higher quality than FM where the receivable signal strength is high enough;  a moot (occasionally mute) point for motorists. The data compression common to all DAB systems tends to discard low level signal information such as studio ventilation noise, which perhaps explains the popularity of vinyl discs among consumers accustomed to the even greater data compression of MP3.

This summary looks at the latest developments in FM transmission and service monitoring announced by some of the leading manufacturers, updated from InBroadcast’s August 2020 overview.

Broadcast Electronics’ STX line of solid-state transmitters continues to expand with a new 3 kW FM transmitter. Based on the RF technology of the STX 10 and the exciter technology of the STXe and STX LP transmitters, the STX 3 includes two RF power supply modules that are front accessible and hot-pluggable, allowing easy service in the event of a power issue. With IP connectivity at the transmitter site, the STX 3 allows transmitter control from a portable computer. Three levels of security control are available from ‘view only’ to complete control.

DB Elettronica’s Mozart FM transmitter is available in 1, 2, 3, 3.5, 6 and 7 kilowatt versions. Frequency range is 87.5 to 108 megahertz, adjustable in 10 kHz steps from the LCD front panel. The integral stereo generator is claimed to provide  greater than 65 decibels of channel separation and greater 80 decibels signal to noise ratio. A limiter keeps the maximum frequency deviation within international requirements to avoid over-modulation and adjacent channel interference. Limiter levels can be set from the front panel. Complete web server SNMP, GSM or SMS remote control is available as option.

Dielectric’s low-power TV and FM business continues to grow as the company develops and expands its range of antenna and RF products for use in lower-power broadcast systems. Radio stations in Florida and Puerto Rico are recent examples of how Dielectric has improved signal coverage for FM translators in challenging coverage areas. Hal Kneller, a broadcast industry veteran now working as an independent consultant, specified Dielectric DCR-T antennas for FM translators associated with WSRQ-AM (Florida) and WMDD-AM (Puerto Rico). The DCR-T incorporates Dielectric’s FM ring-style antennas. WSRQ’s translator for 106.9 FM (W295BH) is part of a blended SFN and simulcasting network that synchronizes programming across four stations in the Sarasota/Bradenton market. In an effort to improve coverage the 250-watt translator, previously located in Bradenton, was moved to Sarasota following FCC approval. “We see a lot of broadcasters stick with budget antennas for translators,” Kneller comments. “Dielectric brings a professional stainless-steel design that offers longevity for lower-power systems, along with the benefits of low VSWR, null fill and all of the other high-performance attributes that you expect for full-power FM stations.”

Elenos’ ET10000x comprises a 10 kilowatt FM radio transmitter in 4U plus a 2U modulator. Available with analog or digital modulation, it has a claimed 70 per cent efficiency when used at full power. Features include  modular construction, light weight, integral diagnostics and an internal protection system.

GatesAir’s Flexiva transmitter range includes ‘PowerSmart’ technology to enhances efficiency across all solid-state and high-power tube models in the series.  Quad-mode operation allows it to function as a common solution for FM, HD radio, FM+HD radio and DRM+ digital radio.  Real-time adaptive correction is included. The transmitter uses a hardware based central interface to a distributed hardware control system. An LCD screen allows review of all operational parameters and diagnosis of any potential equipment problems. Front-panel buttons and LED indicators allow simple control and feedback on all the key operating parameters. The navigation buttons allow for quick review, setup and recall of all menus via the front-panel screen. By simply connecting a PC to the front panel RJ45 jack, the user can monitor and control all the settings locally on the PC. When integrated with single or dual Flexiva exciters, all control of the transmitter and exciter(s) is combined into a single IP address.

Nautel technology has played a role in recent digital broadcast tests conducted in India. All India Radio, operated by Prasar Bharati, has been testing methods of broadcasting multiple digital signals from a single FM transmitter in order to provide a range of services. DRM and HD Radio standards are being evaluated. “Our digital multiplexing concept allows you to combine multiple digital radio signals in the FM band, which are received via existing digital radio receivers,” says Philipp Schmid, Nautel CTO. “Nautel transmitters using digital multiplexing allow broadcasters to operate multiple channel allocations out of one transmitter, one antenna, and one location, which reduces their equipment needs.” The tests conducted by Prasar Bharati have demonstrated the viability of operating up to six separate digital channels from one transmitter, each of which carries multiple HD Radio or DRM services. Each channel can be operated independently, allowing several broadcasters to use the same transmitter while maintaining control over their content and distribution. Nautel had previously played a role in the implementation of digital MW broadcasting across India; 33 high-power NX transmitters now cover most of the country’s population with a DRM signal.

Nautel has also announced that it has reduced the price of VSHD exciters in its VS Series and VS2.5 transmitters and for a limited time. “Low power FM operations that are interested in the benefits and versatility of HD may not have been able to make the conversion due to cost,” says John Whyte, Head of Marketing. “We’re bringing these capabilities within reach through temporary, significant cost reductions in the VSHD upgrade for existing VS Series transmitters. The VS2.5 Analog/Digital FM transmitter is also available at a special price and is ideal for either analog or digital transmission. Higher-powered stations find Nautel VS Series transmitters attractive as backups to their primary transmitters because of all the extra capabilities found in these units. Available in 300 W, 1000 W and 2.5 kW, Nautel’s VS Series products include a direct-to-channel digital exciter, SNMP support and AES/analog/composite/IP streaming audio inputs.

Rohde & Schwarz’ THR9 series of liquid-cooled FM transmitters deliver FM output power of up to 80 kilowatts in two racks. They are available in configurations ranging from single transmitters with a built-in pump unit and space for additional system components up to multi-transmitter systems and N+1 configurations in a single rack. The THR9 transmitter family for band II is claimed to offer efficiency values of up to 75% in analog FM mode. The transmitter has fully redundant cooling and supports IBOC hybrid HD Radio standard as well as purely digital standards in band 2.

RVR Elettronica produces a wide range of FM transmitters, varying in power from the 30 watt TEX30LCD/S to the 3.5 kilowatt TEX3500LCD. Features include stereo encoder, analogue audio inputs and composite inputs for SCA/RDS signals. An RDS encoder with UECP standard functions is available as an option.

Suono Telecom’s ESVA1K is a 1 kilowatt FM broadcast transmitter in a 3U chassis weighing 18 kg. Designed for the 87.5 to 108 MHz frequency spectrum, it uses five-fan forced-air cooling and can operate across a temperature range of -10 to +45 Celsius.

Teko Broadcast’s Neural is a series of digital FM stereo exciters/transmitters available with an output power from 30 watts to 1.2 megawatts in a 2U chassis. Also available is version TX-HE for JPN and OIRT frequencies. The TX-HE can be used as standalone transmitter or as driver feeding high power transmitters and N+1 systems.